Since starting Project DeStress on the 1st of August, it has been all go, getting ready for the first series of fieldwork trips associated with the project. As I write, these are now underway and our first location Brighton, has been completed. A large part of Project DeStress is conducting fieldwork in three cities across the UK, Brighton, Sheffield, and Edinburgh. In each of these cities, we will be selecting a number of spaces which are used by the public for restoration. In each of the spaces, Dr Sarah Payne and I are conducting participant questionnaires, a range of acoustic measurements, and ambisonic field recordings. My role is to record acoustic data and make ambisonic soundscape recordings using the Sennheiser Ambeo microphone. Surveys and recordings take place throughout the day, starting in the morning and finishing just after the evening rush hour. The questionnaires and recordings are conducted at the same time, making it possible to compare findings at a later stage.

Upon arriving in Brighton we headed out to explore the first two locations that we had previously earmarked as potential sites. After visiting the locations, it was decided that Palmeira square would be a great starting location for the study. Palmeira Square is a Victorian square surrounded by Victorian town houses and featuring lawns in the middle between the two rows of houses. Interestingly, the park is bounded at the top by a main road and a bus stop. The square therefore provided us with a wide range of sounds and a diverse soundscape (including the ever present seagulls!) to record.

Recordings and questionnaires went very well during our time in Palmeira Square. The park itself was well used and people tended to come to the space to sit and remove themselves from the hustle and bustle of a busy city. There was a great participant rate answering questionnaires and from some initial analysis of the data, it seems that the location is chosen by many as a place to stop in or purposefully visit to relax and people frequently described the place as peaceful. 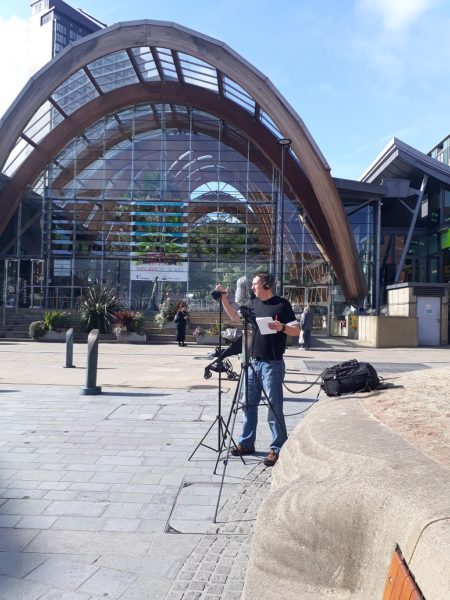 From a recording perspective, there were a few weather issues to contend with as it was very windy at times, with strong gusts coming off the seafront. However, as we were making long-term recordings this should not be too much of a problem as there are plenty of recording data without wind to use. Field recordings have also included a crazy early start at 5am to record ambient baseline recordings (wild track). These base line recordings will form a basis for the soundscapes used in our future model simulations. Having a baseline enables us to add sound elements to a soundscape where there is often little activity happening.

After a whirlwind time in Brighton, we jumped on the train moving up the country to the next city on our list, Sheffield. The same process is currently underway with one space chosen and currently being recorded and surveyed. A few weeks into this study and things are going well. Next stop, Edinburgh!

Listen to this audio clip from a calm urban environment in South Edinburgh.